So much has happened and I wrote nothing about it.. 🙁 Keep Alive

I had this idea for a new solar engine a while back, took a while, but finally uploaded the video, but here it is. In this project I hack a Solar lamp’s brains, the 4 legged YX8018 chip and turn it into a timer. The 2.5V solar panels charge the capacitor. When the capacitor gets abover a certain threeshold (defined by the Diode and resistors across legs 4,3,2), it triggers a discharge of the capacitor, which in turn charges the smaller capacitors across pins 4 and 1 and loads the motor. The circuit was my creation, but Doug’s post @ ez.analog.com definately helped out in the begining. Also took some inspiration from Solarbotics, but the circuits there mostly required 5-6V solar panels, which I didn’t have. I was able to do some 555 timers (without LED flasher) but in the end, this circuit with the YX8018 was the winner, working within a much larger range of lighting conditions.

We just connected an Arduino to the European Space Agency’s Mission Control System, the same software that was used to control Rosetta, Sentinels and all other ESOC missions.

I did it! A young boy’s dream has become true :).. as a kid whenever I dismantled all sorts of electronics devices, mostly to remove the small motors and lights, I always looked at the “green part” (or the circuit board) as something mysterious that I had no idea what it was or how it worked.
Now I’ve built one myself. 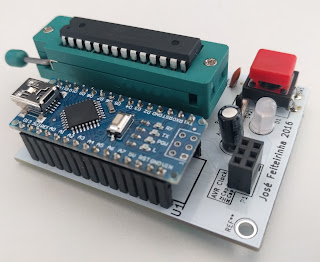 Doing the design was oddly simple, I had already the breadboard setup (see part 1 of this post) and found this great tutorial on KiCad. KiCad is a tool to draw the schematics and the PCB, it’s opensource and although it takes a couple of hours of getting used to, it is very powerful and there are many online resources to help you use it.
Besides the tutorial, I learned a couple things the hard way (read through only if you’re interesting in learning Kicad):
The PCB design

It’s actually two PCBs, one for the programmer, and another for the optional clock. 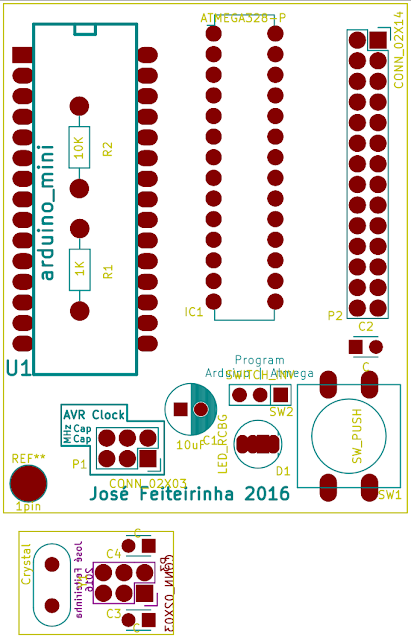 Ordering the PCB
I ordered the PCB from Elecrow, it was quite cheap, roughly 50 Euros total and it arrived quite fast.

PCB give away (limited)!
If you read it this far and you feel like building one yourself, just tweet me and I’ll send you one PCB free of charge.
Naturally a photo once you get it working would be much appreciated. 😉

PS: In case you noticed, yes, the PCB says 2016 and I’m posting this in later 2017. I had written most long time ago, but never really finished it ready to post until now. Been busy with other things, will post about it soon (I hope).

Since my baby daughter was born that the Tinybeans app is the one I use the most on a daily basis. For me this has been a safe haven where we can share our baby’s photos and short movies with our family and close friends away from the public view.
Sure Facebook can have closed groups and you can select with whom to share, but there is value added when an application is done for a specific purpose, it just does it better. There is also a website that my mother uses, but for me, my wife and most family the app does the trick.
Our preferred page is the calendar where it shows a thumbnail for each picture taken since the day she was born, when we delay to add a photo we get kind reminders from the family saying that there is no Tinybeans post yet today.
With our family living across diferent countries (Portugal, Germany and UK) it’s surprising how much Tinybeans contributes to make distances feel shorter and bring the family closer together.

Sometimes in the evenening after she’s asleep, me and my wife take some time with the tablet going through the Tinybeans calendar and contemplate the amazing growth that our daughter has had and how much we’ve gone through in such a small amount of time. It makes us appreciate how amazing life is and how much our own parents have sacrificed for us and why they say it was all worth it.

So, thank you Tinybeans, thank you for a great idea and implementation. As a developer myself I wish you the best of luck and success.

PS: The Tinybeans did send me an e-mail asking for a review on any parenting forum I belong to. I don’t belong to any, but – while it would be appreciated (wink) – I’m writing this above all because it’s true and they deserve it. Too much good feels have sprout from them for me to simply ignore a kind request.

So, rather than buying a programmer, I decided to make my own using an Arduino Nano, altogether I was able to save about.. 1 euro.. and only invested several hours.. 🙂

I mostly followed this awesome tutorial.
With minor changes:
(1) I used a single RGB led with a 1 KOhm resistor. The RGB led is interesting because since different colors have different resistance you have a sort of priority of colors. In this case:
If Red is on, then it will show Red independently of Green or Blue status.
If Red is off and Green is on, it will show Green independently of Blue status.
If Red and Green are off and Blue is on it will (duh) show Blue.
This is awesome since I can use blue for the watchdog, green for write and red for error, all with just one led.
(2) I’ve removed the external crystal by adapting the “minimal setup” shown here.
I still need to  wait for my ZIF to arrive and then design/printout the casing + do the soldering, but after many hours I’ll be happy because I saved about 1 euro if at all. 🙂
In the casing, I’ll probably add slots so that I can easily plug-in the clock and capacitors in the future.
The capacitor shown of the left of the Nano is required for most cheap ones and must be removed when programming the nano itself, so my casing will also have a “Program Arduino/Program Atmega” switch that disables the capacitor when programming the arduino directly.
As a way for me to keep up, here is a list of my current on-going pet projects.

Its an hardware fun project, involves soldering and 3d printing. Most of it is planned in my mind and plenty of parts have been bought and are its way. Currently I’m trying to get an Arduino Nano to program an atmega328p which will be the micro-controller used.
Still not sure:
– how I’ll be able to upload new tasks (if possible at all)
– whether or not I’ll have support for batteries (requires a power booster for the LCD and battery charging circuits)
Board Charts – Trying to extract line/circles information from a picture and overlaying that information as a way to make it look more professional.
MOonRails – Making programming for micro-controllers easier by merging code conventions and communication standards. That’s all I can say for now 😉